Although pop-up shops are suspended for the moment, the website is still open for business and orders are being fulfilled. Many thanks and take care.

Sorry, there are no upcoming news or events at this time.

Anthony Smith Books is devoted to old-fashioned, personal service. All my stock is hand-picked. The books are chosen because they are gripping, informative, attractive, rare or a combination of these qualities. They are in the best condition I can find.

Art and architecture, biography, children’s and illustrated, fiction, history, sets and travel are the main categories. Quirky and unusual items can be found in the Oddments category.

I have been a bookseller since 1987, first at Hall’s Bookshop in Tunbridge Wells, then at Heywood Hill in Mayfair and, most recently, at Slightly Foxed on Gloucester Road. Over the years, I have been lucky enough to engage with many customers from all walks of life and nothing gives me greater pleasure as a bookseller than putting books and people together face to face. I continue to do this at regular pop-up shops in central London and at book fairs around the country. Please keep an eye on News & Events for notice of when these take place or sign up for the newsletter. 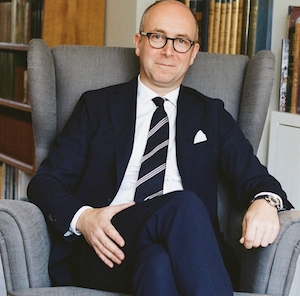 In July 2019 I had a pop-up shop in Drake's shop on Clifford Street just off Savile Row. The nice people at Drake's interviewed me for their website.

How did you get into the rare book trade, and how long have you been doing this for?

When I was at university, I had a holiday job at Hall’s Bookshop in Tunbridge Wells. That job turned into full-time work when I graduated in 1990 because I found that my interest in literature, history and the arts was totally engaged by dealing in large quantities of old and rare books and sharing that enthusiasm with customers. In 1995 I moved to London and ran the secondhand side of Heywood Hill’s bookshop in Mayfair for the next fifteen years. Anthony Smith Books, launched in 2015, is my independent business selling online and at regular pop-up shops in the West End. I am delighted that it manages to combine the best aspects of my previous employment and allows me to offer a bespoke service to my clients around the world.

What is the rarest item you have had in your possession?

Manuscripts are obviously unique items, but the most storied book I have enjoyed placing with a favourite customer was a set of the memoirs of the Marquis de Caulaincourt. He was an advisor to Napoleon and strongly urged him not to invade Russia in 1812. His memoirs were unpublished and lost until the 20th century. German officers used them as a reference work when planning and executing their invasion in 1941. One set of the English translation was bought by Winston Churchill and then given by him to Jan Smuts. They had been on opposite sides during the Second Boer War, but Smuts had been one of the founders of the Royal Air Force during the First World War, and there was even a plan during the Second World War to install him as Prime Minister if Churchill were to die in office. I enjoyed discovering the history and personalities connected to this gift and then knowing that it had found a new home where it would be treasured.

Is there a particular book that has always eluded you?

One of my best-loved books when growing up was Watership Down by Richard Adams. There was a signed, limited edition of 250 copies published in 1976 with illustrations by John Lawrence and a new foreword by the author. Copies were bound by Sangorski and Sutcliffe in full green morocco leather. I have been the underbidder at auction a couple of times, but I haven’t yet had the book for my stock. This is probably just as well, as I might then be tempted to keep it for myself. Booksellers have to be ruthless about what we keep, or we would all go out of business very quickly!

What makes a book valuable?

Scarcity, importance and condition all play their parts in determining the value of a book. A first edition of Ian Fleming’s Casino Royale is a good example. It is the first James Bond novel and there are now many more people wanting to have a copy of that book than there were copies printed. The dust jacket is a fragile piece of ephemera; although it adds very little to a reader’s enjoyment of Fleming’s tale of espionage, it matters greatly to the cost of the book. A really nice example will be worth much more than a tatty one, or one that has no jacket at all.

Is now a good time for rare books? Are people returning to physical media in this increasingly digitised world?

Rare books have always had their fashions. Prices for particular authors or subjects go up and down. Ian Fleming is another good example of this. He was a clever book collector and spotted a gap in the market. He chose to collect first editions of important works of science when they were under-valued by most people. When an exhibition was held called ‘Printing and the Mind of Man’, he was the largest private lender and that helped raise the value of his collection. I believe rare books will always be collectable. There is a frisson in owning association copies like the memoirs mentioned above, but many books have interest because they are beautifully-printed, or illustrated by an artist you like, or have a sentimental connection to a time or place in your life which a download will never be able to capture. Someone once described money as ‘frozen desire’; books are crystalline human thoughts. They are tactile, decorative and ‘Books do furnish a room’.

How can our readers start their own collection of rare books?

Establishing a relationship with a book dealer is the best place to start a collection. Browsing shelves and having a conversation can help you decide where your areas of interest lie. The book seller will have years of knowledge and experience and should be able to guide you, making suggestions and offering opportunities as they arise. Time is very important. Naturally, there are occasions when a client needs tens of metres of shelves filled by yesterday, but in the vast majority of cases a collection will be much better if you are patient. Some things turn up frequently, others are worth waiting for a lovely copy even though the book is scarce in any condition. Hopefully a dialogue develops between the book seller and the book collector that enriches them both. There are always new things to learn, and book collecting can be fun and informative.

I'd like to be notified of new arrivals in the following categories.

Check all categories that are of interest to you.